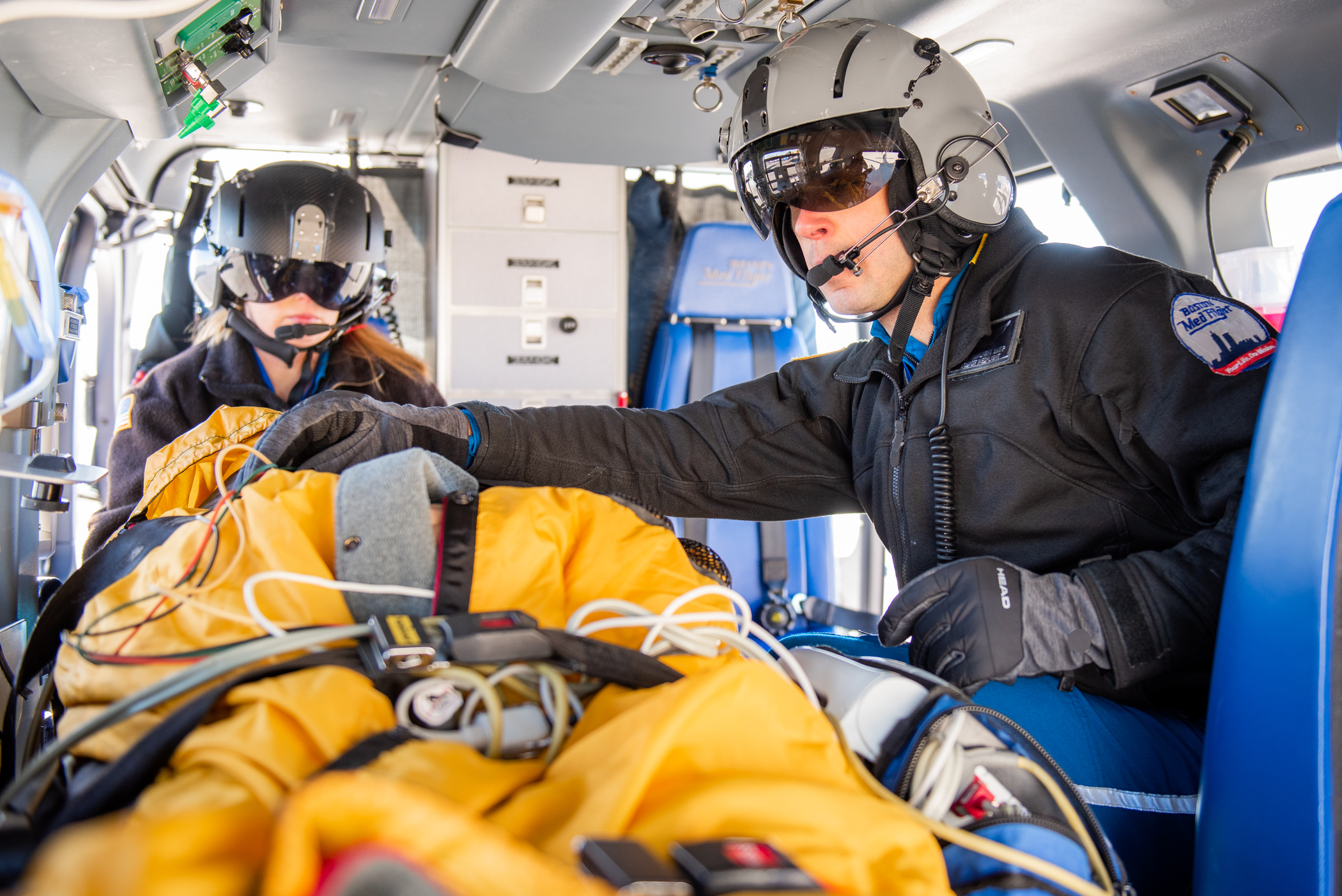 December 03, 2020 The following is a first person account from a former patient recounting her Boston MedFlight transport experience.

After feeding my two-week old daughter in the early morning hours, I went upstairs and put her in her bassinette. Hoping to get a bit more sleep before my 3-year-old woke up for the day, I climbed into bed beside my husband. As I was plugging my cell phone into its charger, my right hand started to go numb. Assuming I was just at an awkward angle, I tried to shift my position—and then the entire right side of my body was gone.

I reached for my husband with my left hand, trying to shake him awake. Being asleep, he thought I wanted a cuddle, and wrapped his arm around me. Unable to talk, I threw his arm aside—which woke him up. Within a moment he recognized that something was terribly wrong. He called 911.

Upon arrival, the EMTs immediately called out, “Code stroke, code stroke.” I’m a physician assistant, so I understood what was going on. I also understood how rare it is for a 31-year-old female to have a stroke.

The ambulance took me to Beth Israel Deaconess Hospital-Plymouth. My husband stayed behind at home, scrambling to find childcare so that he could get to the hospital.

I was given a CAT scan, although I don’t remember it. I do remember seeing the vascular neurologist at Beth Israel Deaconess Hospital-Boston on video chat. The typical treatment for ischemic strokes is tissue plasminogen activator (tPA), given through an IV in the arm, which works by dissolving the clot and improving blood flow to the blood-deprived part of the brain. But the tPA wasn’t working; the clot wasn’t dissolving. I needed to get to Beth Israel Deaconess Hospital-Boston for emergency surgery.

I remember being put on a stretcher. As the team transferred me into the Boston MedFlight helicopter, a woman assured me that everything was going to be OK. Then I lost consciousness.
When my husband finally made it to Beth Israel Deaconess Hospital-Boston, the neurosurgeon pulled him aside and said, “We’re going to do everything we can, but I want you to know that she could die.”

The next thing I knew, I was in the OR. The neuro-surgeon reassured me with “We’re going to take care of you.” The mask went over my face, and I was gone again.

My next memory is waking up in the neuro-ICU. The neurosurgeon found my husband and told him that things had gone as well as possible. “But,” the surgeon said, “she’s still intubated and she may never come off the breathing machine.”

Just 10 minutes later, the surgeon came back and said, “Well, actually, she’s off the machine. She can’t talk, but she can move everything.” My husband was considerably relieved at that point.

After 24 hours in the neuro-ICU, I was transferred to neuro floor, where I stayed for five days. I had aphasia —a language impairment that affects speech due to brain injury. I could think words, but I couldn’t speak. Several times a day, someone would ask me my name and date of birth—which I knew in my head but was unable to say.

It turns out I had a patent foramen ovale (PFO)—a hole in the heart that doesn’t close the way it should after birth. Perhaps related to pregnancy or childbirth, a clot had traveled to my heart. It could have gone anywhere, but it went to my head and blocked the middle cerebral artery. My cardiologist told me that  I was too young to be on Coumadin for the rest of my life, and I needed to have the PFO closed. I had that surgery in October 2015, and stopped taking Coumadin the following February. My recovery included months of OT, speech therapy, and hard work.

One day my cardiologist said to me, “Do you realize how lucky you are?” He showed me the head scans I’d had at Beth Israel Deaconess Hospital-Plymouth. “Wow,” I said. “Those are my scans?” Most people who have a stroke like that usually slip into a coma and die. I am beyond fortunate and I know it. My outlook on life is totally different now; work is no longer my first priority. It’s all about family and the things that truly matter most.

I wouldn’t be here today without Boston MedFlight. Boston MedFlight saved my life. It’s as simple as that. I may not have been conscious during my transport, but I know how courageous these people are. As a nonprofit, it’s truly amazing that they do what they do. And I’m living proof.

We need your support to ensure we can continue to get the sickest of the sick to the care they so desperately need.
DONATE
TODAY!